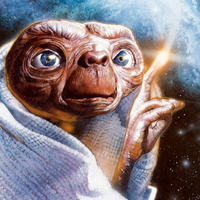 The first time I became aware of product placement as an adult was when ET: The Extraterrestrial came out. It seems that Mars decided that M&M’s not be the bait that Eliot uses to lure ET. The filmmakers went to Reese’s, and the result was that sales of Reese’s Pieces shot up 65%.

I knew that the heroes of Independence Day in 1998 probably didn’t use Macs to save the world- the PC was hot back then- but it felt good to see Will Smith and Jeff Goldblum using MY Powerbook to save the world.

Apple is still pushing product placement. They took first place in 2011 and 2012 for the Brandcameo Awards, with products appearing in 42.5 percent of the top 40 U.S. box office hits. Second place was a three-way tie between Dell, Chevrolet and Ford with Cadillac, Coca-Cola and Mercedes-Benz coming in third.

For the recently released Man of Steel, Chrysler has even hired one of DC Comics artists to illustrate their print ads.

Why has product placement become more important? One of the reasons is the rise of alternate ways to view media. We can skip through TV ads with ease, so how do advertisers get their products in front of the public? One way is to embed them in the content people want to see- i.e. the movies or shows they’re watching.

But how does product placement actually influence us as consumers? By making us implicitly prefer products rather than explicitly prefer them. Our  attitudes towards the movie or show we’re seeing can subtly determine whether we like a product or not. Even though we may be unaware of it, the feelings and emotions we experience while we’re watching something may be transferred to the products placed in the program.

The process can work both ways- when Charlie Sheen was on Two and Half Men and if you thought he was jerk, you might have negative associations with any products placed in the show.

One study shows that even when people are alerted to the fact that placements are a from of advertising, and have a negative reaction to that, they still may have a positive reaction to the product if it’s associated with a character they liked!

Product placement is big business because it works. Viewers don’t necessarily realize that it’s a subtle form of advertising because the advertisers aren’t hitting you with something that you want to scan past with your DVR. Combined with online marketing activities, it’s a powerful pull weapon as opposed to the push weapon of traditional advertising.

I mean after all, how could I resist buying a Powerbook to save the world.