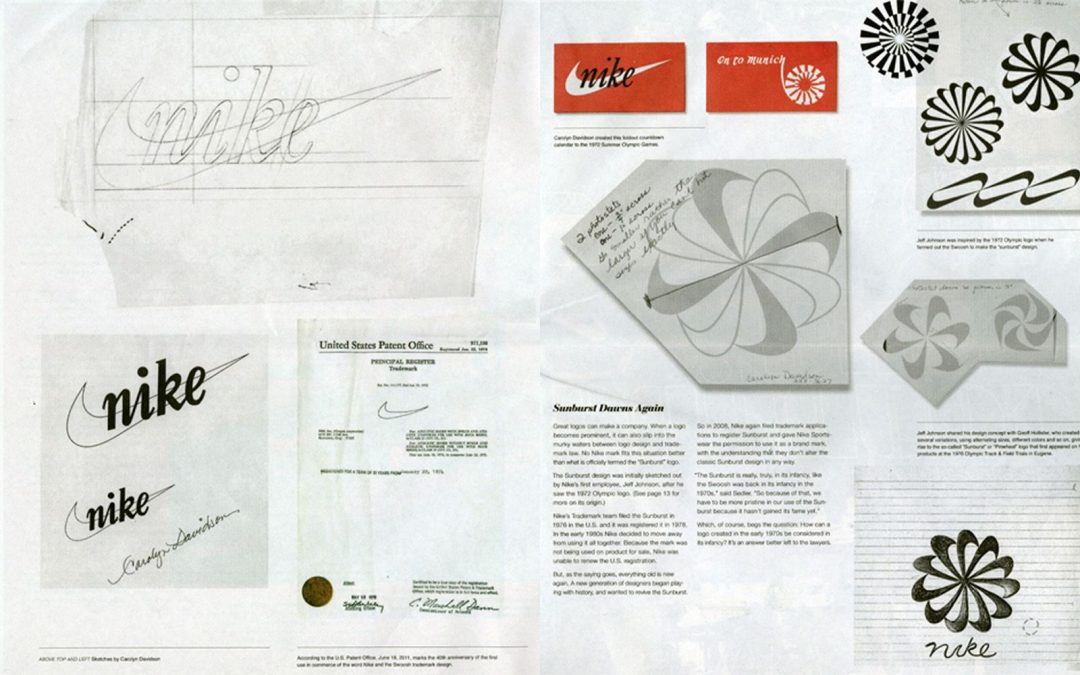 I meant to write about this last month, but life got in the way. June was the 50th anniversary of Nike and the anniversary of the ubiquitous Nike Swoosh. From the branding and marketing perspective, the company has few rivals, but the story of the Swoosh is what interests me as a designer.

Originally, the company was Blue Ribbon Sports (BRS), co-founded by Phil Knight. In 1969, he had hired a design student, Carolyn Davidson, who worked on graphics for his business. In 1971, Knight wanted to differentiate BRS’ custom line from one they were importing from Japan. “Then one day Phil asked me if I wanted to work on a shoe stripe,” Davidson recalled. The only advice she received was to “make the stripe supportive of the shoe.” She came up with half a dozen options, none of them “captivated anyone” so they picked the one that was “the least awful”. Knight thought it looked like a big comma. Davidson got $35.00 for the design, but after she left the company they invited her back for a buffet lunch, a gold and diamond Swoosh ring, and an envelope with an unspecified amount of stock.

Nike was the Greek goddess of victory, and the swoosh sort of represents her wings but could also be a checkmark. The original thought was that it conformed to the shape of the sneaker.

As to the tag line, “Just Do It”. The guy who pitched it to Nike said it was a serial killer’s last words.

Knight has said that the company’s big breakthrough was that they weren’t just selling sneakers. The company’s chief design officer, John Hoke, says that they’re not designing products, but ideas. The transformation from selling a commodity to brand identity is only equaled recently by Apple.

Such effective branding can have a downside. In 1998, Nike considered dropping the Swoosh after reports of child labor violations and unsafe working conditions in Asia. The Swoosh was labeled the swooshsticka by activists. Ultimately Nike kept the design.

The company has maintained its positive identity through scandals, defections of superstars and questionable business practices. It’s a company that’s huge ($44.6 billion) but its products are bought because people see them as a way to express their individuality. They may be selling a brand, but it’s still a ton of sneakers.

Take a look at Nike’s branding and marketing.

To find out how we can help you with your branding, drop us a line!