Way back when, a chart was simply a way to view data visually. We created bar charts, pie charts, line charts, and made them as attractive, accurate, and easy to interpret as possible.

Technology has created an information explosion, so the task of helping people get their hands around tons of information they may or may not actually need has gotten more complex.

For now, we’ll leave the important question “when is information actually data?” for another blog.

Which path would you rather follow to get a green card? Click to see a larger image.

What Should a Good Infographic Do?

Edward Tufte, in his book The Visual Display of Quantitative Information, defined what he thought a graphical display should do: 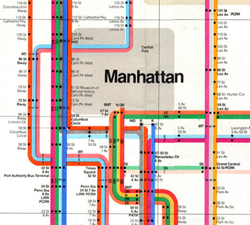 The first time I became aware of what can be done with information graphics was in the seventies when Nigel Holmes was doing elegant, witty and understandable charts for Time Magazine and Massimo Vignelli designed his first New York City Subway Map in 1972. The map was controversial (and redone 5 years later) because it made the subway lines horizontal and vertical instead of showing their actual angles and it made Central Park a square instead of a rectangle.

Both the map and Holmes’ graphics did exactly what an “infographic” are supposed to do- they make the information they contain accurately accessible.

A recent study at Harvard called What Makes a Visualization Memorable, provides some interesting insights::
•    Visualizations with more than six colors were much more memorable than only a few colors or black and white
•    Graphics with a lot of visual density were more memorable than minimalist approaches
•    The subjects remembered charts with more curves than they did with straight lines
•    Bar charts and graphs were easily forgettable because people said they all looked alike

Does this Mean the Busier the Better? Does Memorable Mean Effective?

In the Harvard study, researchers do not appear to have assessed how well the subjects retained or understood the information, just whether or not they retained the image.

I suppose in some cases study subjects might as well have been looking at wallpaper samples.

What About the Data and the Source of the Graphic?

Consider the source- If the infographic comes from, let’s say, the imaginary National Association of Transfat Manufacturers, are you really going to believe that the big bold headline with a heart next to it that says “Have a cup of hydrogenated vegetable shortening with every meal!” along with some “statistics” that seem to indicate transfats won’t necessarily cause coronary heart disease?

Do the Data as Presented Tell an Accurate, Complete Story?

Mark Twain popularized the phrase: There are three kinds of lies: lies, damned lies, and statistics. Does the graphic tell the whole story objectively? Charts and diagrams can be set up to show results differently; if the graphic uses a poll, who conducted the poll? How were the questions phrased? Was the sample size large enough to have a true meaning?(click here to see examples).

It’s Not Just the Presentation!

So for the designer, the task is to make the Infographic as clear, attractive, informative and honest as possible; for the viewer the task is to look at the information contained in the design and make sure that the story it’s telling is true and not just an attractive surface.

Next time: Tools to create infographics.