Branding, Showing It All, and Drinking Your Own Kool Aid

I got two emails about rebrands that gave me WTF moments, but for different reasons. 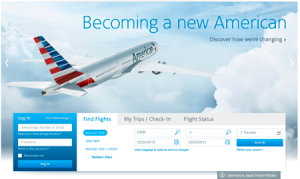 The first was the announcement that for the first time in over 40 years, American Airlines has rebranded itself. Some may argue that the Massimo Vignelli design has become dated, but the circumstances and timing of the rebranding itself are questionable. The company is in bankruptcy, its revenue per passenger seat grew more slowly than its major competitors, its employees want new leadership, and American is looking to merge with US Airways. Is this the right time to spend millions of dollars on a major rebranding effort?

As far as the mark itself goes, it’s a generic-looking, abstract eagle that could work for a car company, a stationery or label company, or pretty much anyone who wants to look American. Interestingly, Vignelli says in an interview that there are 11 stripes on the plane’s tail–not 13. Does 11 represent Chapter 11?

Vignelli also points out that:

“This is the typical mistake that company presidents make: “I’ll change the logo, and the company will look new.” What you have to have is a president who knows how to run the company, and in that process knows how to evaluate the brand identity. Otherwise it becomes a wolf camouflaged by sheep. It’s still the same company that’s not going to be successful. They’re not going to solve their problems, they’re just going to increase their costs… Styling is very much emotional. Good design isn’t—it’s good forever. It’s part of our environment and culture. There’s no need to change it. The logo doesn’t need change. The whole world knows it, and there’s a tremendous equity. It’s incredibly important on brand recognition.” You can see it all here.

The other revealing branding tidbit that came in was the announcement that noted designer and visual philosopher Stefan Sagmeister has taken on a partner and rebranded his firm. 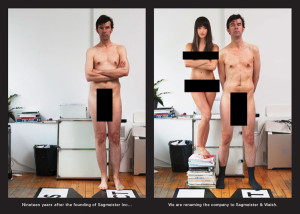 They announced it with an email and card featuring a full frontal shot of the partners nude, and the news announcement on their web site has the staff in the altogether too.

Sagmeister’s original going into business announcement also had him in only socks- but there were three of them.

WARNING: the images are probably NSFW (not suitable for work), unless of course, you work at MoldaveDesigns, in which case we’re all over them.

I guess my question is “why”? Their work is great, he’s had shows at the Institute of Contemporary Art in Philadelphia (now moved to Toronto). Is it just to make a splash? When you operate at the level that they do, why do something as distracting as this? I’d be curious to know if it gets them new clients and if they look at them above neck level at the first meeting.

The other issue goes into their branding itself. It’s very straightforward, very graphic, very nice. But do we really need icons of sex acts and a woman vomiting into a toilet as on their CD labels? Again, MoldaveDesigns being what it is, we’re cool, but if, as Vignelli says, good design is good forever, and styling is emotional, whatever this is, it isn’t good design.

Click on the button for a free, fully-clothed evaluation of you marketing materials and branding.