When I was just breaking into the graphic design profession there was a great variety of illustration styles that were flourishing; from painters whose styles carried over from the 1950s to artists creating a new language in visual arts. From painterly to abstract, there was a huge number of incredibly talented illustrators working at the time. 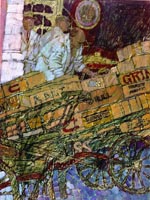 This came to mind because of an article in The New York Times about a British illustrator named Brian Sanders. It seems that creators of “Mad Men” were looking to duplicate the style of some 1960s illustrations to market the fifth season but couldn’t quite get it right. Then they found Sanders, 75 years old, who was the illustrator who did the originals they were looking at and found he’s still working, so they commissioned him to do the art.

” ‘What it did was take me right back, about 50 years,’ said Mr. Sanders, who added that he was familiar enough with “Mad Men” to be in a bit of disbelief when the show came calling for his drawing board and brushes. The impressionistic image he created uses a scumbled acrylic technique that in its jazzy, textured effects instantly conjures 1960s illustration.”

This got me thinking about the illustrators that I “grew up with” professionally. Mark English– who started out painting latrine signs in the army and wound up winning more awards from the Society of Illustrators than any other illustrator. There wasBob Peak– who revolutionized movie poster illustration; Bernie Fuchs, sports painter extraordinaire, and so many others.

The other style that was dominant was the “Push Pin” style of Milton Glaser and Seymour Chwast, with its heavy outlines enclosing watercolor or flat color areas. This style even carried through to the movies with “Yellow Submarine“.

I enjoyed the variety of illustration styles that were employed enthusiastically in the media of the time – magazines; editorial or advertising; posters, even packaging took advantage of the richness of artistic vision that contained the past and future in one present.

That richness seems to be gone now. The speed of today’s media seems to mitigate against the time and effort needed to develop art of the diverse kind produced then. There’s a lot of imagination in animation techniques that are being used in today’s commercials and movies- but in a lot of cases they seem to be slick and used mostly for style and not for substance. Maybe there’s something to be learned from working with a 75-year-old illustrator who doesn’t use digital media. It will be interesting to see if the “Mad Men” campaign brings back a look from a time that we seem to miss today.