140 Little Characters for Marketers to Love

Here is what one hundred and forty characters look like. Is that enough to get your message across? Are your customers & prospects tweeting? 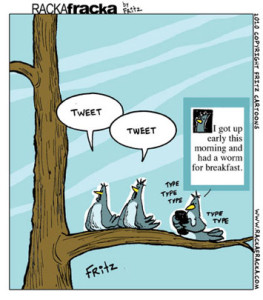 Social media tools aren’t “effective” by default. It’s up to marketers to optimize social media and other marketing tools and to define “effective” so that results are meaningful, trackable and can be compared.  You can apply the SMART goals system to help define your social marketing effectiveness goals.

You can make the most of Twitter and other marketing tools by researching how your company’s target audiences use those tools and understanding how various tools should fit into your overall marketing plan. Intuitive, possibly. Easy-to-do, not necessarily – especially since the “most effective” B2B content marketers employ an average of 7 social platforms.

As with any social media tool, you need to ask yourself and your team “why should we use that particular platform?”

Does it really matter how many people in the general population are tweeting and how many zillions of tweets there are in the universe? No – what matters is whether or not your targets are tweeting, reading tweets, and taking action based on tweets. Are your customers and prospects using Twitter? Are competitors, industry influencers and other key people you want to follow tweeting? If not, should Twitter be high on your list of marketing tools?

Understand “Twitterese.” Become familiar with what Twitter terms such as Retweet, Favorite, Hashtag, and Mention mean and how to use them.

@username: Also known as a Twitter handle. Must be unique and contain fewer than 15 characters. It’s used to identify you on Twitter for replies and mentions.

Hashtag: A hashtag is any word or phrase immediately preceded by the # symbol. When you click on a hashtag, you’ll see other tweets containing the same keyword or topic.

Follower: A follower is another Twitter user who has followed you to receive your tweets in their Home stream.

Mention: Mentioning other users in your tweet by including the @ sign followed directly by their username is called a “mention.” Also refers to tweets in which your @username was included.

Messages: Use Messages to have private conversations with people you follow who also follow you. Messages have a 140-character limit and can contain text, hashtags, links, photos and video.
Promoted Tweets: Promoted Tweets are tweets that are paid for by our advertisers. These appear in your Home timeline, at the top of search results on Twitter and elsewhere on the platform, and are clearly marked as “Promoted.”

Pinned Tweets: You can pin a tweet to the top of your profile page, to keep something important to you above the flow of time-ordered tweets.

Reply: A response to another user’s tweet that begins with the @username of the person you’re replying to is known as a reply. Reply by clicking the “reply” button next to the tweet you’d like to respond to.

Retweet: A Tweet that you forward to your followers is known as a Retweet. Often used to pass along news or other valuable discoveries on Twitter, retweets always retain original attribution.

Retweeting: The act of sharing another user’s tweet to all of your followers by clicking on the Retweet button.

Check out Puppets Who Know Stuff about Marketing for an entertaining take on Twitter.

Some  sources to help you find out more: